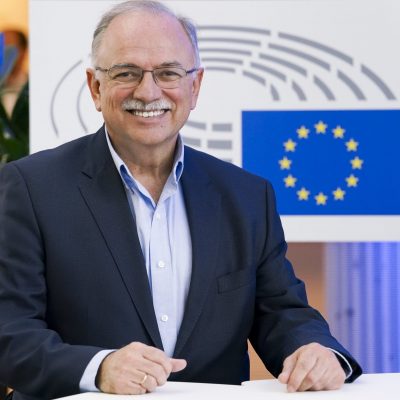 Born in 1955 in Athens. Graduated with distinction from Varvakeio Junior High School of Athens and studied with scholarship at the School of Civil Engineering of NTUA (National Technical University of Athens).

He has worked as an engineer and business executive for 25 years (1980-2004). He is married to Nadia Soubasaki and they have two children.

At the suggestion of Alexis Tsipras, he was unanimously elected head of the SYRIZA delegation.

In an earlier report by VoteWatch.EU, he was also one of the three most active MEPs in the entire European Parliament, for the period 2004-2009.

Member of European Parliament. Elected first, with the highest number of votes among the SYRIZA-Progressive Alliance MEPs (272.835 votes). Head of the SYRIZA delegation at the EP.

Responsibilities as Vice-President of the European Parliament: